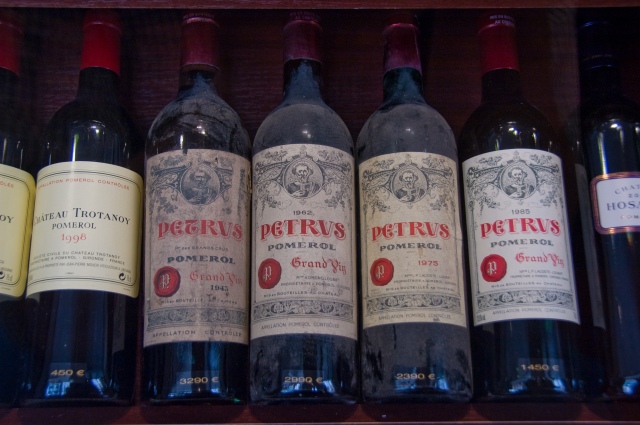 French Bordeaux wine from Château Pétrus, from as early as 1945 and selling for as much as 3290€ (Wikipedia)

Climate isn’t the only thing affecting the French wine industry. As with almost anything in today’s hyper-globalized world, French wines are entirely dependent on the market, which is looking more and more foreign than before. With changing regulations, shifts in consumer demands, and a less-than-stellar economic climate as of late, the French wine industry is experiencing some significant changes – or trying (in vain) to resist these changes.

The bottom line is that France is producing less wine, and drinking less wine. Production and consumption rates have fallen in the past few years. While lower production is largely related to the environmental concerns discussed in my last post (as well as a government-implemented scheme to reduce surpluses in order to keep French wine competitive), the reason for falling consumption is less clear. The most feasible answer points to END_OF_DOCUMENT_TOKEN_TO_BE_REPLACED

Protesting may well be France’s national sport. And of the many groups who excel (daily) in this endeavor, French farmers may just be the best.

Over the past few days, French farmers have taken to dumping tons of produce and piles of manure outside of government buildings and in public squares in protest of the Russian embargo on Western imports and economic downturn in the agricultural sector as a whole. This kind of agricultural protest is not new; the French Revolution itself was fueled by farmers fed up with high taxes and terrible living conditions. In fact, the French farmer protest seems to be a relative constant throughout history, which is not surprising considering END_OF_DOCUMENT_TOKEN_TO_BE_REPLACED